If you are searching for a yet undetected death metal band, then maybe you should check out Bloody Invasion from Brandenburg, Germany. The band exists since 2012 and
these days they released their first full-length album called "Zombie Society". 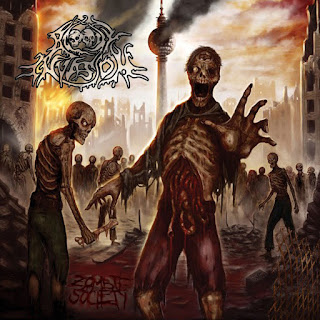 You can hear influences from bands such as Master,(early) Vader, Sinister,(early) Gorefest, Benediction, Bolt Thrower, Obituary or Massacre-I think you got an first impression and the previously mentioned names are not the worst references when it comes to death metal. The fifth track called "Metropolis" starts and ends with real beautiful melancholic acoustic guitars, I think the band should use these elements  more, the talent can't be denied. To sum it up, the band uses the slogan "death metal-no compromise", and this description fits perfectly, you won't find foreign or non-traditional elements while listening to "Zombie Society".