GRAFVITNIR from Sweden released their fitfth album named "Keys to the Mysteries Beyond", which is a a really outstanding black metal release. So I decided to to an interview with Niantiel- we spoke about black metal, occultism and their aversion to public relation - hope you like it.

First of all, how were the reactions towards the new album ? I think most of the listeners like it a lot, right ? In my opinion  “Keys to the Mysteries Beyond“ is one of the best black metal albums within the last years and I hope in some years it will be regarded as a classic! It can be described as fast tradtional Swedish black metal in perfection, I can hear similarities to Sacramentum, Svartsyn, Sorhin, Dissection and (old) Watain. Do you agree ?

Thank you very much for your words of appreciation. The reactions have been mostly positive, but what is most important is that we ourselves are satisfied with our creation, the rest is only a bonus.
I would say that I personally can hear the similarities with Sacramentum, Dissection and of course early Watain (which at that time was hugely inspired by Dissection). The reason for this is probably because music usually is derived from the soul and music created by swedes tend to have noticeable characteristics that are audible and well documented.

The cover artwork from Daniele Valeriani is a really outstanding piece of art as well, how did you get in contact with him? I have seen that this artwork also was published in an art book together with other cover artworks from other artists.

In fact, our good friend Daniele contacted us and offered us cooperation. When I later saw the first sketch of what was to become the cover art for "Keys to the Mysteries Beyond" I instantly knew that this was going to be what we were looking for. Our cooperation runs smoothly and we are extremely happy to work with such a magnificent talent that he is.

What‘ s the main concept behind “Keys to the Mysteries Beyond“? Death and life after-death?
Do you believe in any form of existence after the physical death and how will this after-life existence be defined? Do you think there will be a state of counsciousness that still hold (any kind of mental) connection to the individual’s prior human life?

The main concept behind "Keys to the Mysteries Beyond" is our undying admiration and love for the invisible and invincible forces of the Otherrealm, which is our source of Creation and eternal driving force.
Yes, I believe different souls and spirits have different vistas of origin, which they eventually return to after this mortal coil.
I do not believe that our consciousness remains after our departure from earthly life though, but that we are forced to drink from the river Lethe, nevertheless, interests and feelings for different matters and subjects may very well remain within you in the form of sanguine and emotional memories after the countless of lives you have lived prior to this one. The personality you have achieved in this lifetime, on the other hand, is only a shell that covers your true essence, and the ego is a total human conception and construction, an utterly vain and pathetic obstacle, dividing us from godhood and divinity.

Grafvitnirs concept includes „Chaosophy“. What does this mean ? In one of the rare interviews you gave I read, that you like Kenneth Grant, Denis Lindbohm and Aleister Crowley. Can you tell us more about Grant and Lindbohm ? And what do you think about Austin Osman Spare (who was a friend of Kenneth Grant I think later) and his sigil magic (that combines aspects from Sigmund Freud as well)? What do you think about automatic writing and lucid dreaming?

What's there for me to say about these persons? I think Grant made a huge impact on the occult tradition with his depiction and survey of the Qliphothic tunnels and spheres, and Dénis Lindbohm explained the spirit World in greater detail than what had been done earlier. Regarding Austin Osman spare, symbols are well known to reach the subconscious with far greater ease than any words ever could, and he acknowledged these things with his sigil magic and his legacy is today greater than ever. He, also, quite needless to say really, managed to put the art forms surrealism and symbolism into focus. Regarding automatic writing and lucid dreaming, I have personally experienced both phenomena countless of times, and I find them both being splendid methods for letting the forces of Beyond express themselves without anything being lost in translation so to speak, using you as a mere instrument, a vessel for them to speak and communicate through. 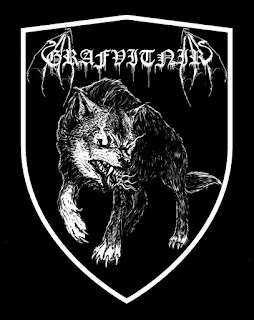 What are your main influences music-wise, or better said, were there special bands that gave the impetus to found Grafvitnir ? Or caused by the current lack of bands that you once admired ?


We are inspired by the bands we grew up with, like Kreator, Destruction, Celtic Frost, Bathory, Iron Maiden, W.A.S.P. (only the first album), Accept, Saxon, even if these mentioned acts probably are not particularly noticeable in the soundscapes of Grafvitnir. I don't care that much for the black metal scene up to date, even if we of course have good friends participating in different bands of both the second and the third wave.

To be honest, I only found out about Grafvitnirs existence when I disovered a copy from the album “Semen Serpentis“ in a local record shop some years ago. But I think a lot of people who would like your stuff don’t know about the band’s existence as well. I could not find lots of interviews online so I think Grafvitnir is “underrepresented“ and lesser known than other Swedish black metal bands such as Svartsyn, Setherial, Sorhin, Ofermod, Malign (not to speak about the famous bands such as Marduk, Watain or Dark Funeral of course). Is this „abstinence“ from the public a conscious decision or are there any other circumstances that media / magazines ( and as a result of this you don’t reach so much possible listeners / buyers) don‘ t pay so much attention to Grafvitnir ?

We're not into this PR stuff. Bands are paying huge amounts to be included on tours and in magazines or in the best case scenario they tour the world for nothing. To be a black metal band that travels around for nothing to tell people how misanthropic we are never seemed like an option for us in the first place. If people like our albums (that we enjoy greatly to do), that's fine with us. We're also very much enjoying the creative process around album releases, like working with layout and so on. If we were exhibitionistic buffoons I presume we would have chosen another style of Music to express ourselves through.

You did not play live yet, right ? Why not, don’t you like it ? And will you maybe play some live gigs in the future ?


No, we do not enjoy it that much.
I presume our answer to your previous question explains this a little bit further...

Are there any other special future plans for Grafvitnir ?

Yes, we will continue with what we are doing until we don't feel like it anymore. Simple as that.

The last words are yours…

Thanks for the interview and good luck in the future.
May the Modern World be torn asunder in the fires of Ragnarök.
As the descendants of the primordial Serpent and faithful children of Fenrir, we are boldly and defiantly carrying the torches of the fires of Loki - the draconian fire that fiercely will spread all across the countless worlds and become the triumphant force and primus motor behind a new magical empire forged upon the hearth of the Lightbringer, id est our noble and righteous paternoster and brilliant beacon and lantern in this world of demiurgic darkness.